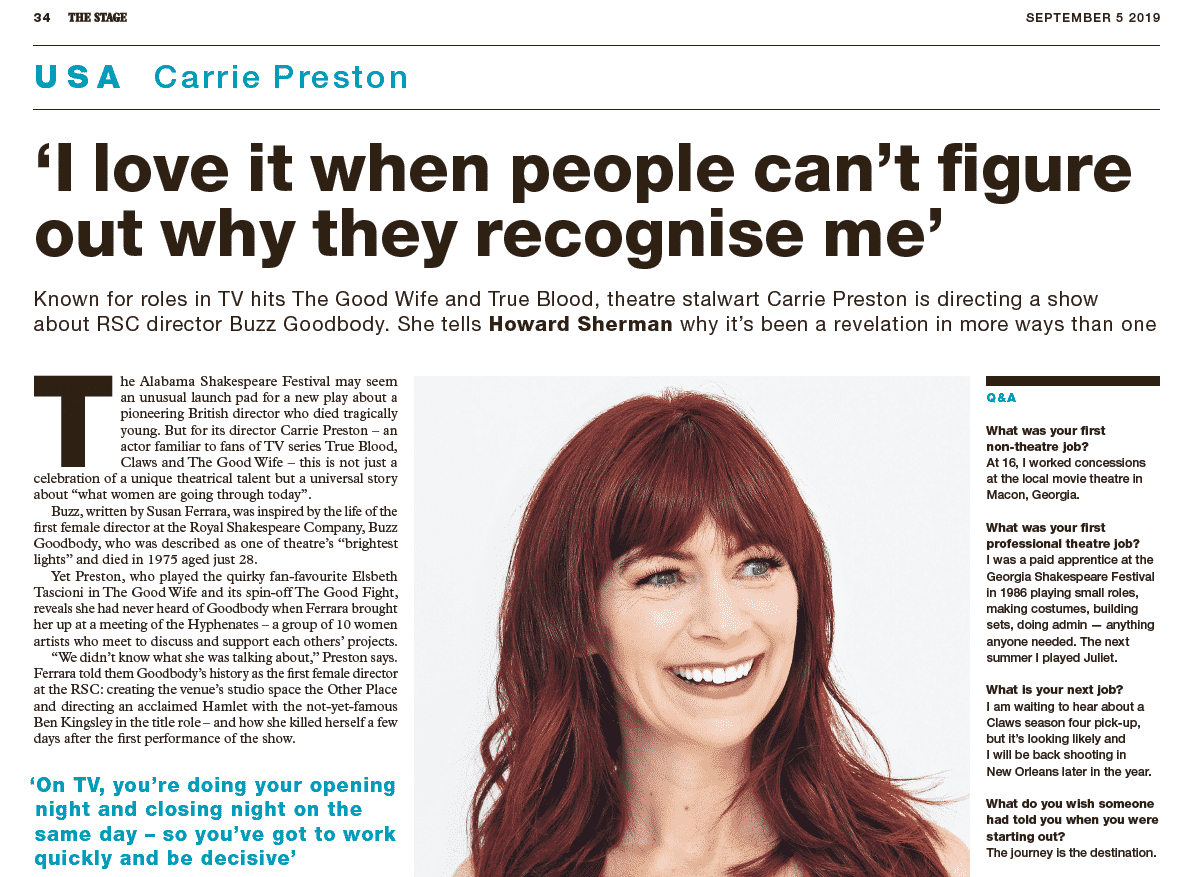 “In the way that Shakespeare used his history plays to make allegorical comments about his time, Susan [Ferrara] is doing the same thing with Buzz,” the director says. “It’s very much about every woman striving to be seen, to be heard and to be remembered. So it’s very relevant to what women are going through today, not just in America, but everywhere.” 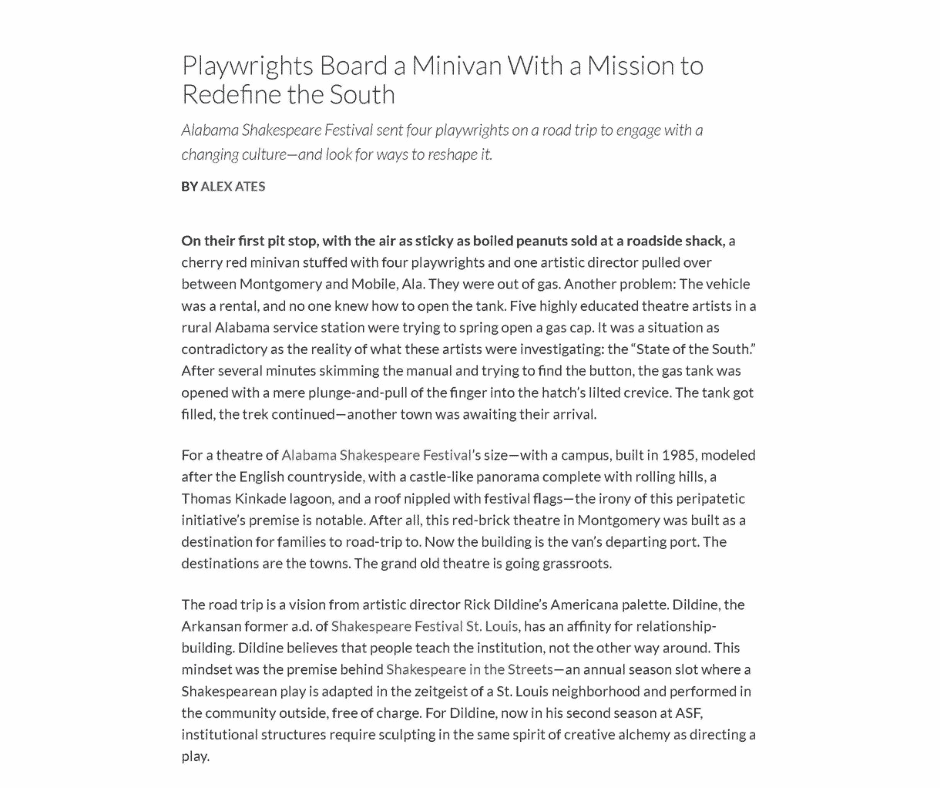 Playwrights Board a Minivan With a Mission to Redefine the South

“With each artist captaining a stop, they collaborated with hosting venues like local theatres, art museums, and chamber centers to entice people out. Their charge? To research and rethink the mission of the Southern Writers’ Project to reflect the realities of the South in 2018.” 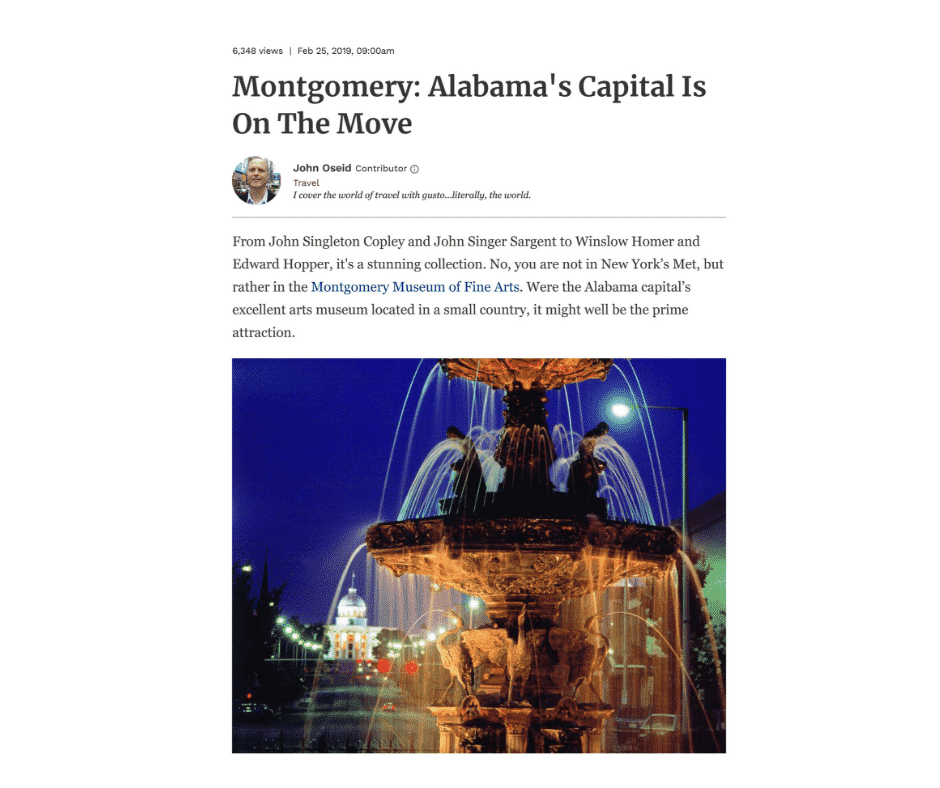 Montgomery: Alabama's Capital Is On The Move

“Located along with the MMFA in the enormous Blount Cultural Park, the Alabama Shakespeare Festival is considered one of the world’s finest of its kind.” 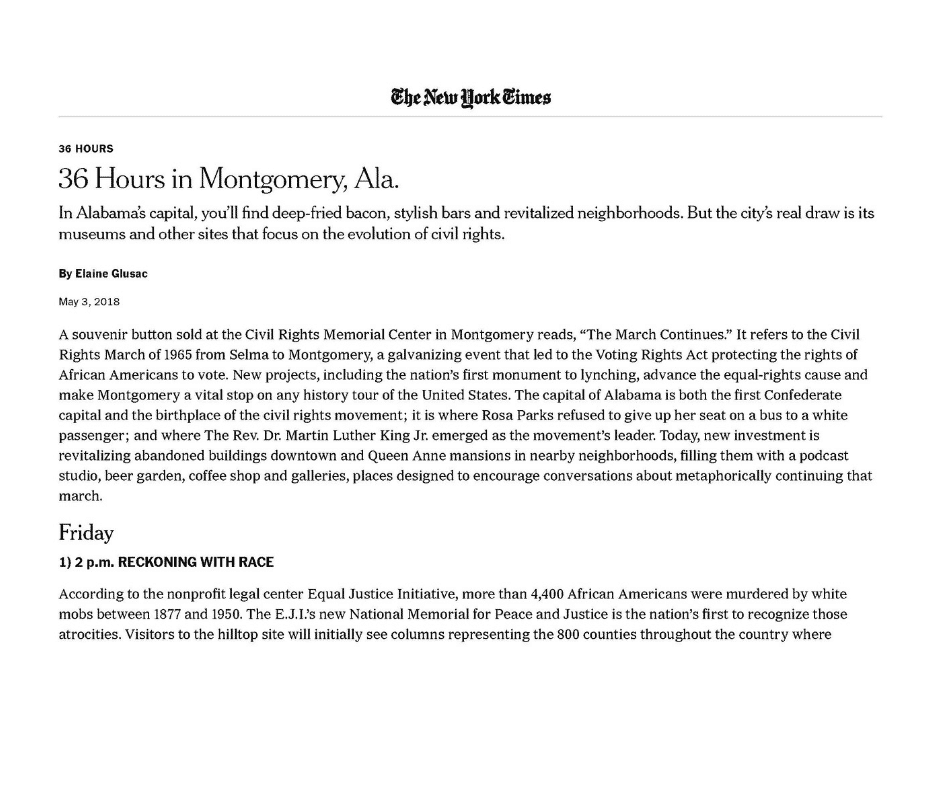 36 Hours in Montgomery, Ala.

“Its new artistic director, Rick Dildine, aims to make the state’s biggest theater, the Alabama Shakespeare Festival, even bigger by expanding its offerings.” 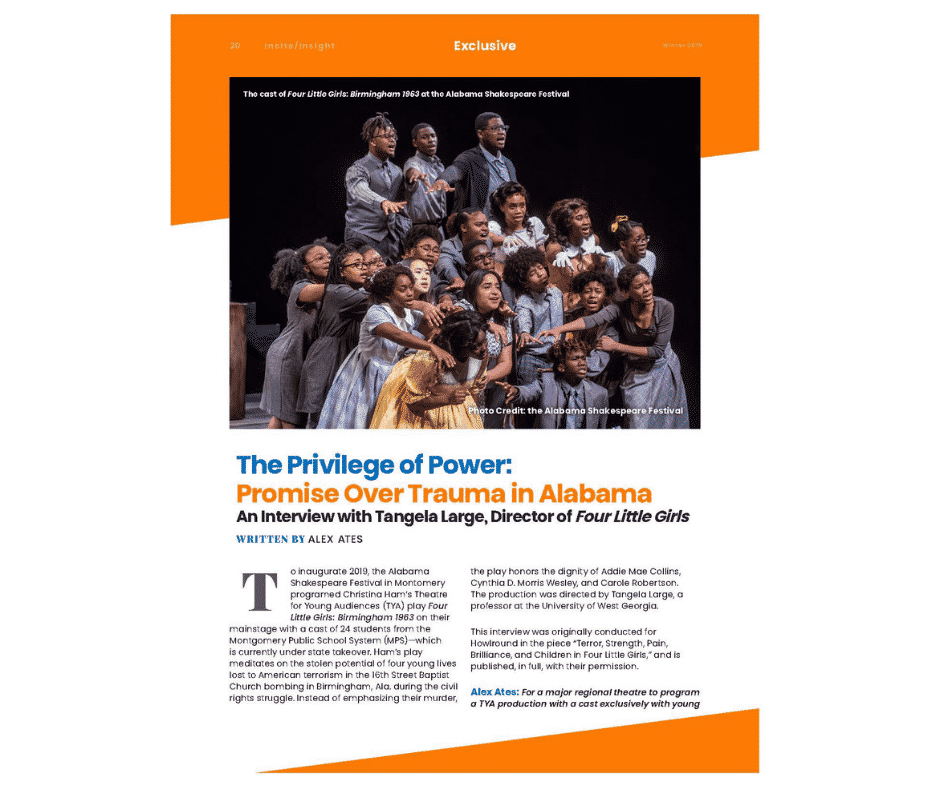 The Privilege of Power: Promise Over Trauma in Alabama

“To inaugurate 2019, the Alabama Shakespeare Festival in Montgomery programed Christina Ham’s Theatre for Young Audiences (TYA) play Four Little Girls: Birmingham 1963 on their mainstage with a cast of 24 students from the Montgomery Public School System…” 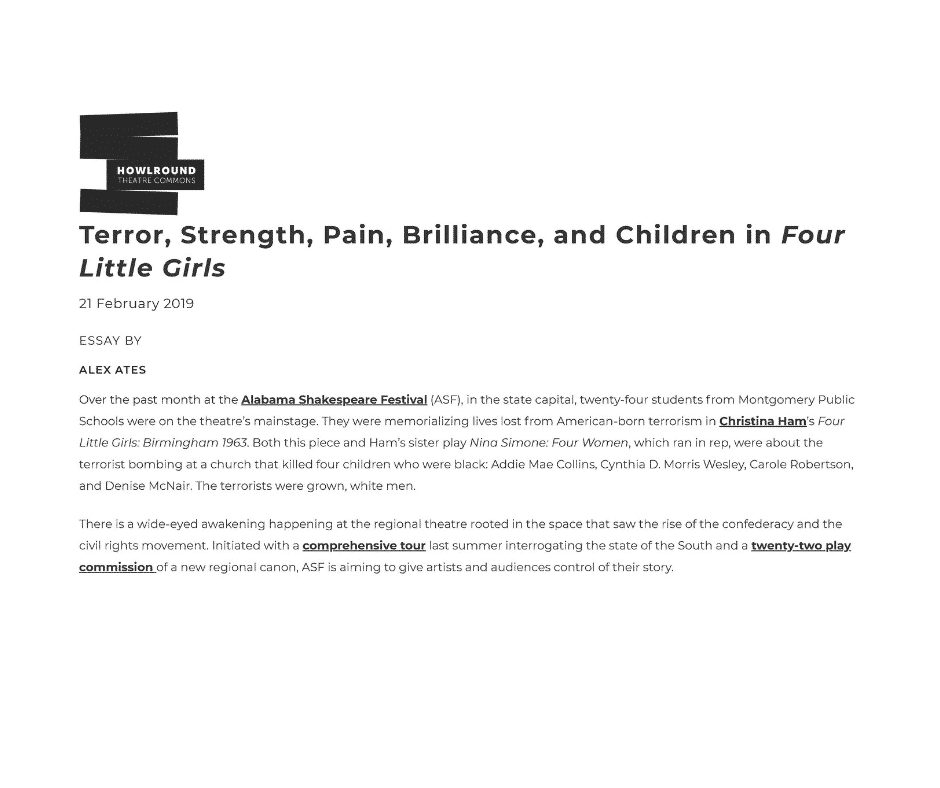 “There is a wide-eyed awakening happening at the regional theatre rooted in the space that saw the rise of the confederacy and the civil rights movement. Initiated with a comprehensive tour last summer interrogating the state of the South and a twenty-two play commission of a new regional canon, ASF is aiming to give artists and audiences control of their story.” 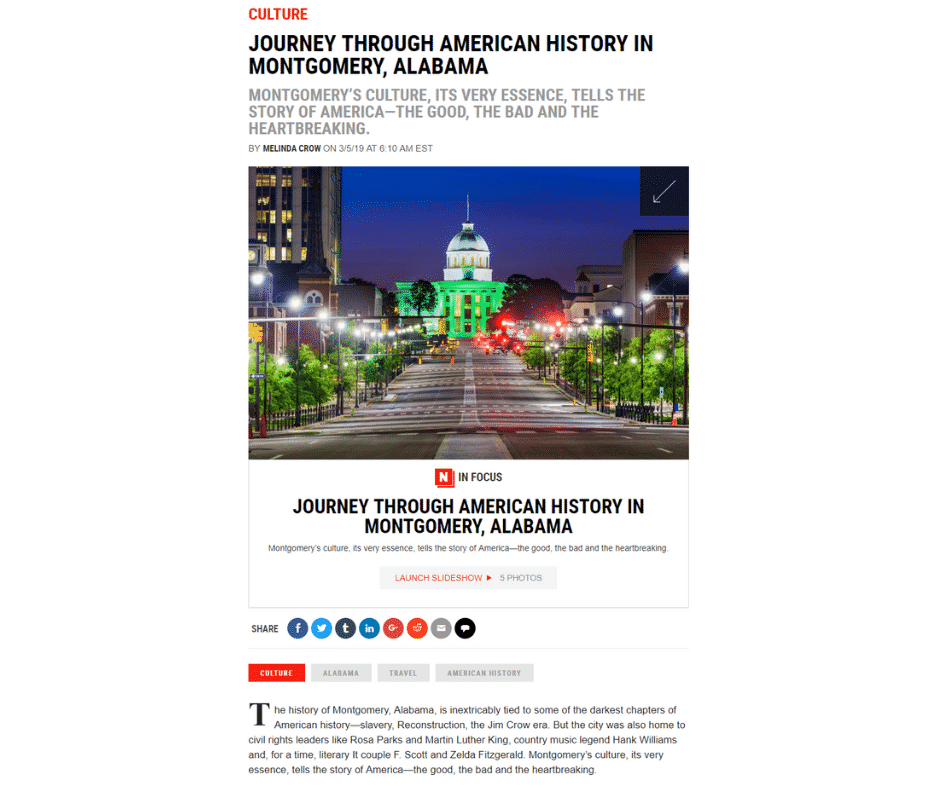 “Montgomery’s culture, its very essence, tells the story of America—the good, the bad and the heartbreaking.” 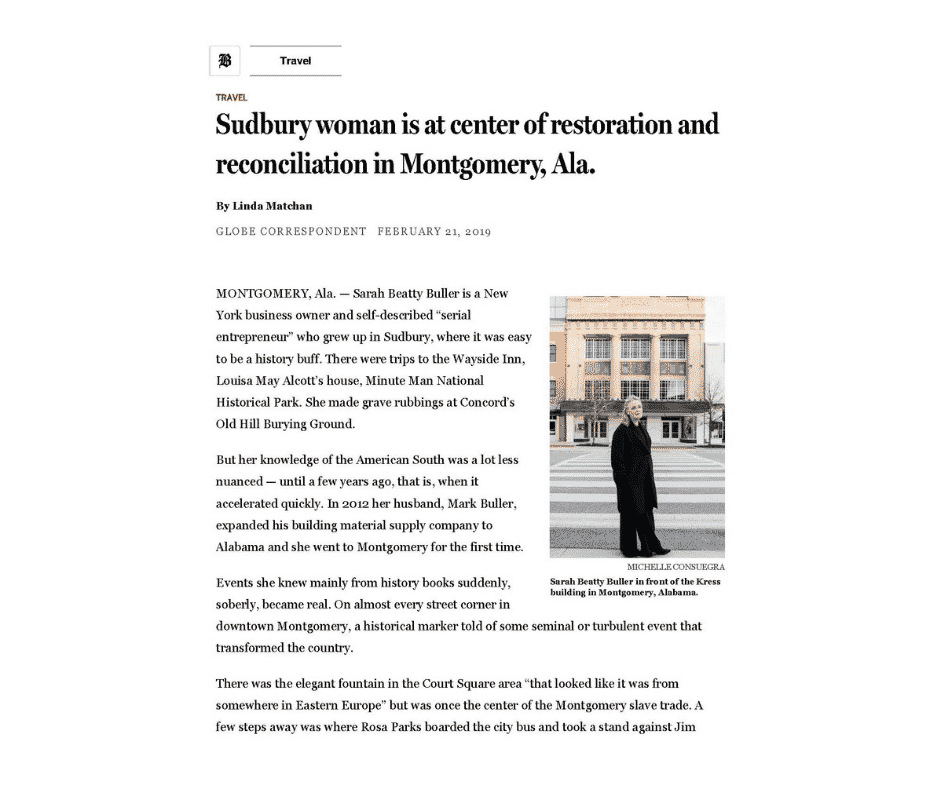 Sudbury woman is at center of restoration and reconciliation in Montgomery, Ala.

“‘Montgomery is going through this moment,’ said Todd Schmidt, the new executive director of the Alabama Shakespeare Festival. The company had just staged a production of Four Little Girls: Birmingham 1963, about those four young girls killed in the Birmingham church. ‘We have to own up to our history, understand it, embrace it, and learn from it,’ he said.” 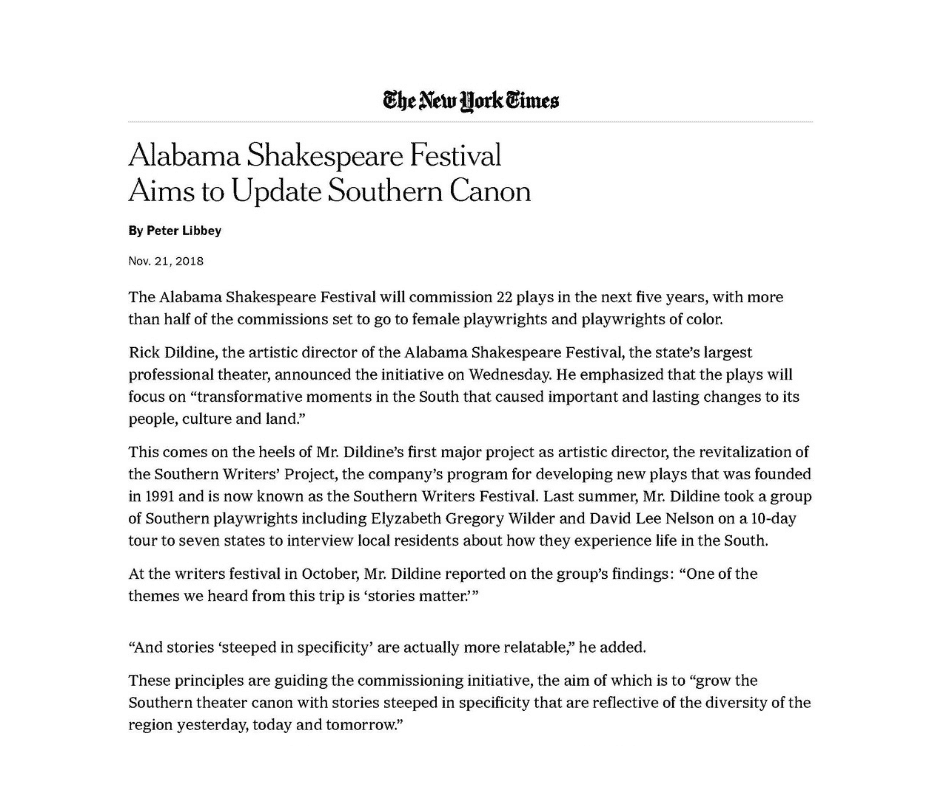 “The Alabama Shakespeare Festival will commission 22 plays in the next five years, with more than half of the commissions set to go to female playwrights and playwrights of color.” 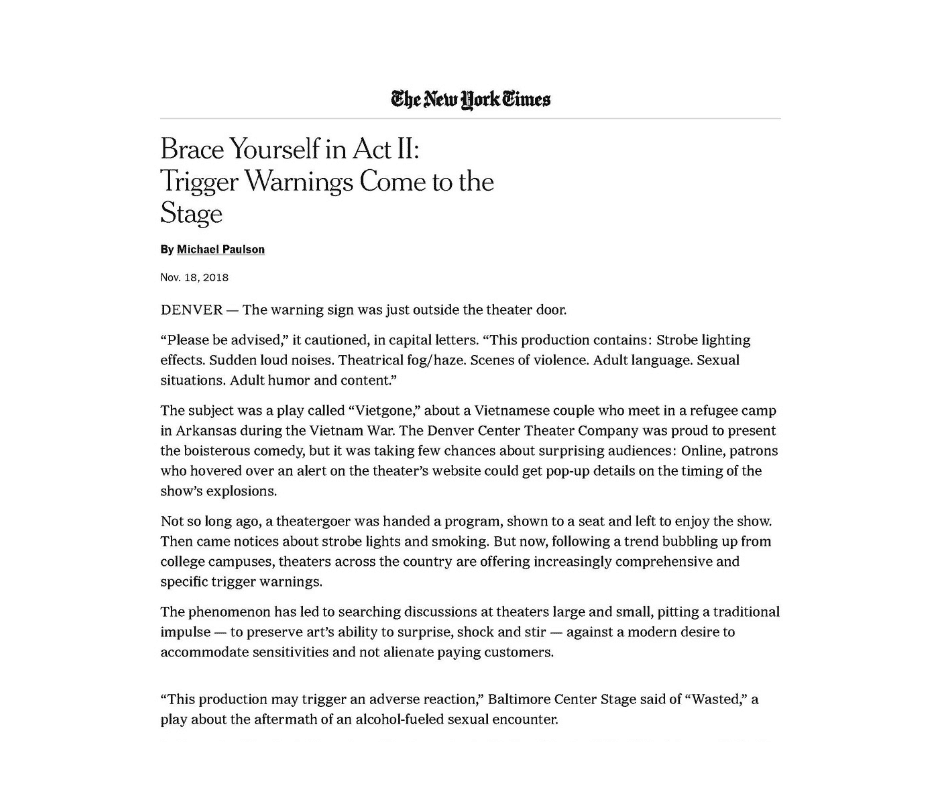 Brace Yourself in Act II: Trigger Warnings Come to the Stage

“‘In our market, strong language and sexual innuendo tend to be the leading causes of negative patron reactions,’ said Katie Perkowski, the marketing director for the Alabama Shakespeare Festival.”

The cast of Alabama Shakespeare Festival’s production of Four Little Girls: Birmingham 1963 on a Civil Rights tour of downtown Montgomery.

The State of the South Documentary

On the road with Alabama Shakespeare Festival.

What audiences are saying

Audience members talk about the immersive experience of  Every Brilliant Thing.